It wasn’t the most romantic of meetings. Barbara Cartland wouldn’t have given it house room; but when our eyes met over the Wright’s meat and potato pie I knew he was the man for me.

Bertram Ollerenshaw. Not the most romantic of names either. No Sebastian Montgomery, or even a Charles Sylvester. Nothing with a refined, sophisticated ring to it; just plain old Bertram Ollerenshaw. It suited him though. A down to earth, hard worker. He worked in the small, family owned pot bank around the corner. I’d never have met him if the cooker in their work’s canteen hadn’t blown up, but there you are. Fate works in mysterious ways. Anyway, we started courting and the rest as they say, is history.

He was a gentle man, my Bert. Always kind and softly spoken. I don’t think he ever raised his voice in all the years we were married. We were blessed with three lovely children and our life was content; not exciting, content. Many were the times we thanked God for faulty equipment, that dodgy cooker in his work’s canteen.

We were blissfully unaware however, that faulty equipment, as well as bringing about our introduction, would also be our swansong. Lovely man that he was, you’d never have said that Bert was a DIY genius. He’d never have passed Tommy Walsh’s inspection, but he had a go; he always had a go.

If only he hadn’t had a go at the outside light. My fault really. I only mentioned it, but knowing bodge it Bert’s bungling enthusiasm, I should have kept my mouth shut and called the electrician; played it safe. You can’t be too careful with electricity.

All would have gone well if there hadn’t been a power surge just as Bert was about to disconnect the light. I’ll still see the look on his poor face until my dying day. He wore a quizzical ‘What the…?’ kind of look, just for a split second, then he lit up like Postman Pat at Blackpool Illuminations, before crashing off the ladder to the floor.

I did everything I could. The paramedics did everything they could, but it was no use. My poor Bert was fried to a crisp. It seemed ironic somehow to then have him cremated, but that had been his wish. He’d wanted his ashes scattered on our favourite clifftop in Cornwall, where we’d walked in our youth.

So here I am today, doing just that. I raise my hands, tossing the contents of the urn, all that’s left of my poor Bert, onto the feisty sea breeze. There you go Bert. Dance on the breeze my darling, rest on the clifftops. Goodbye my love – until we meet again. 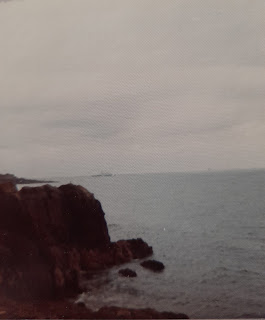 Phoenix
I am a divorced mum and nanna. I have suffered from ME/CFS since 1995, which forced me to give up my job as a learning support assistant to pupils experiencing difficulties with literacy and numeracy in a mainstream high school. I started to write seriously in 1995 and it has saved my sanity. For many years I tried the traditional route to publication but then I discovered FeedARead.com and have since published ten novels, two memoirs and two short story/poetry collections with them. All books are also available as ebooks from Amazon, and most also in paperback via Amazon.